Recently, I got over my horrible cold, for about three days I had a raging headache, I even stayed at home on Thursday that's when you know its bad. I completed chapter 17 in history, which was all about war strategy and victory of World War 2. We completed a unit in Spanish class and I GOT AN INCREDIBLE score on the test it was great! However Spanish will get crazy because no matter what Spanish I've taken they over lode us with work in the end!! Chemistry has been rough I've been keeping up with my twitter grade and hopefully I can hold it all together until the semester ends.
Learned a little I guess, History I learned why exactly the Nazis blamed the Jewish people for a lot of things, and it was because they ran successful businesses, they also had very separate life style(schools, language, beliefs, etc.). Music wise in choir we are learning a lot of songs with Jewish roots and its a very interesting music style, it sounds different but good. Making solutions in chemistry is about the only thing I am good at(except for I split 12 molar HCl everywhere inside the hood).
I plan to start and finish my Literacy Glog for chemistry class...well off to read, bye!
Posted by Ethan at 6:28 PM No comments:

There are plenty of industries that use titration, but I decided to pick the one that seems to be slightly futuristic because biodiesel is a relatively new technology! You may say to yourself "wait a minute Ethan! How exactly does the biodiesel industry use titration?" Well hold on to your pants! You are about to find out. So basically the waste vegetable oil that biodiesel facilities get is chock-full of fatty acids, which would be good if you were making soap(but that's a different story).

Vocab: Ester-"Esters are chemical compounds consisting of a carbonyl adjacent to an ether linkage.[1] They are derived by reacting an (acid and a alchol).   (1)

"To make biodiesel fuel efficiently from used vegetable oils and animal fats we have to avoid one major problem: soap formation. Soap is formed during base-catalyzed transesterification (using lye) when sodium ions combine with free fatty acids present in used (and some virgin) vegetable oils and animal fats. The soaps diminish the yield because they bond the methyl esters to water. The bonded esters get washed out at the washing stage but make water separation more difficult and increase water consumption. This process takes care of the free fatty acids." (2).

So in English, you need to neutralize the fatty acids or they will bond to the methanol which is important making and being a part of the fuel. Now that is settled you ask "Where does titration come into play?" Your answer is: You have to get a sample of waste vegetable oil, and determine how acidic it is, once you know that you can add the salt to the right ratio in a large amount of the oil!
The chemical equation is a little difficult to do, because the salt (usually KOH, NaOH, or CH3NO) gets processed out eventually. However this explains it fairly well.

Vocab-Transesterification is the chemical process which replaces one type of alcohol for another in an ester. An ester is made by combining an alcohol with an acid.(3)


"The chemical formula for biodiesel transesterification is: C3H5(RCOOH)3 + 3CH3OH <-> 3RCOCH3O + C3H5(OH)3
The biodiesel transesterification process is slightly reversible making it difficult to get 100% conversion. To push the reaction to it most complete status we use LeCh�telier's Principle and offset the reactants to drive the reaction in a more favorable direction. The formula above calls for 3 moles of methanol for every mole of vegetable oil, but we double that to six moles of methanol to take advantage of LeCh�telier's Principle. After we convert from moles to volume we end up with 1 part methanol to 5 parts vegetable oil.(3)"

I posted on some other Blogs!!!

I commented on Windy's blog :

"Don't get nervous until the day comes, and you shouldn't be anyways I think you have chemistry down because you answer a lot of questions in class. Good luck dude!"

Her blog has a very clean design and is super helpful, Windy explains things well in her blog

"Do you know when we will ever use electrolytes? And thank you for mentioning the HW I almost forgot!"

Sophia is very organized. I really like when Sophia makes jokes, there are very few of them, but they are funny!

Man, this week was nonstop homework. I wasn't necessarily behind but I had to juggle chemistry, Spanish, and history(and even then I didn't do any Spanish homework because its not worth that many points). High school is all about playing the system if necessary. Anyway we had chemistry notes almost every night, and I have no idea why they take so long to do! There is a lot of pausing, writing down, and un-pausing. The notes  covered chapter 4, I want to say there was about 5 different notes. Thank goodness that I can pick up Spanish so quickly if need be, we had a vocabulary test on Thursday and I had no time to study! The only time I had to study was the five minutes for passing period and the five minutes the teacher gives us to review, but I know I at least got a B+. In history we basically did the same old, we had to write a half page summary of 1 section of the chapter and I wrote a full page (mostly on accident there is a lot of information).
There is a lot I have learned but maybe not fully understand in chemistry...yet! Like electrolytes, I really don't know why we learned about them, other then maybe net ionic equations and solubility. The notes covered a lot more, i have learned about Net ionic equations, which is basically the equation of what reacts in a reaction. Metathesis reactions, which aided in determining the probably products of a chemical reaction, like combustion, single replacement, double replacement  composition, and decomposition. and of course redox reactions, which is short for oxidation reduction, and that is all about following electrons in reactions. History is passing on, I've learned plenty of things about World War 2. We are learning various military tactics that all the countries used, German sub warfare and how the U.S. used radar and airplanes to combat it. And also the less military impact of it such as, the governments involvement in the economy, issuing rations, encouraging Americans to cut back on things like gasoline.
The war effort during World War 2 was probably the single greatest war effort. Here is a fun fact: Did you know movie maker Mel Brooks Fought in the "Battle of the Bulge." And out side of class I know two new words "Hangry" the feeling of being so hungry that you are irritable, and "amn't" mostly used in Scotland it is the contraction of am not.
I plan to start to prepare for all my end of course exams by studding over the weekend with the aid of the local library, maybe get Chemistry for Dummies or something along those lines.
Posted by Ethan at 5:32 PM No comments:

Now with the elections over I feel the need to rant a little bit. This was a Facebook post of mine "I don't care for politics, I'm not old enough to vote, and if I cant make a difference yet then why even care where our country is headed? It will concern me when I'm older, but I'm not older." Having shown that I will correct myself and dish some of my concerns/opinions. I want Puerto Rico to become a state along with the American Samoa, and possible a take over of Canada and Mexico. Having said that I want our flag to be this:
I want a better fix on Social Security, I want it to be state mandated. I feel its completely necessary to have Social Security, however I think that 330 million people is to many to handle for the Fed's. If it was state run,  I feel people best interests would be put in regards and the program would work smoothly. What if people live longer in other states? Then the retirement age could adjust accordingly.
That was my political rant, thank you.
Posted by Ethan at 5:49 PM No comments:


"Potassium Chlorate is a compound containing potassium, chlorine and oxygen. It is often used as a disinfectant and in fireworks and explosives. When potassium chlorate is heated to melting point, any item added to it will cause a rapid disintegration in the form of an explosion (as we see in the video above). The gas coming off the potassium chlorate is oxygen. Because of this, it is often used in airplanes, space stations, and submarines as a source for oxygen. A fire on the space station Mir was attributed to this substance."
Source: http://listverse.com/2008/03/04/top-10-amazing-chemical-reactions/

So yeah its not exactly "everyday" but its not like Potassium Chlorate isn't rare either. You wont encounter this reaction everyday, but it may prove useful if you wake up in an action movie with no oxygen. In simple terms Potassium Chlorate will become unstable when melted, it will disintegrate with the addition of Sugar! And you know whats great the gas that is released is only O2. I think someone should care about this particular reaction because its part of our lives, it could easily look very harmful if you were on an airplane and you see stuff like this come out of a generator. Here is the reaction: 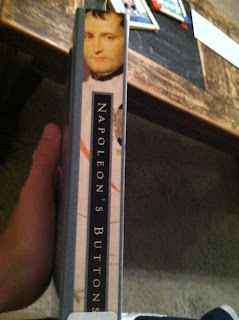 This book is way better then I thought it would be, however it has nothing to do with Napoleon! Napoleon is   a person that I highly regard, so I was very distraught about this discovery. I am actually learning how chemistry works in biology, like how most creatures other then humans can produce vitamin c. Also that the human brain runs off of sugar brought from the blood stream. The world we have today was affected by the simple structures found in pepper, nutmeg, cloves, and vitamin c (those are the ones I have read about, there is so much more.) The previous molecules I listed fueled and/helped the age of discovery, which in turn developed south and north america. I really dig the structure of this book, It links all the things you have read about to the next! Hopefully I can kick into high gear and finish it.
Posted by Ethan at 4:40 PM No comments: